Hexing Cats to be tricksters

Another tutorial that I posted to the forums a long time ago. This is for hexing cats to be tricksters if they aren't already. Putting it here for reference.

Okay guys, I've found the "gene" that makes catz tricksters. I've wondered about this for a while, but hadn't been able to find any info about it. I figured that if dogs could be hexed to be trotters, there must be a similar way to make catz be tricksters. I'll admit that the idea of trying to go through all that code to find the "trickster gene" myself was a little daunting as I totally suck with numbers. I was hoping I'd come across info from someone else somewhere explaining how to do it. But DoktorGilda's post on my hexing dogs to trot tutorial thread was the impetus I needed to get off my lazy butt and just do it.

Now, this is still a little new to me and there's a few things I'm still not sure of. So if someone knows something and can add to this tutorial, I'll happily add it in here, with credit of course. Okay, on to the tutorial.

Hmph. I don't do tricks.

Besides, you don't need to do any tricks when you've got a butt like this. Just look at it! Have you ever seen anything quite as sexy? I mean, how many cats have 10,000 dollar insurance policies on their fannies alone?

*rolls eyes* If his ego gets any bigger, we'll have to evacuate the whole state. Insolent, conceited little twerp.

Nothing. Anyway, we all know the frustration of a cat who won't do tricks. You take out a treat, wriggle it, and the cat just repeatedly stalks the treat.

And of course, that annoying habit of leaping over and trying to snatch the treat right out of your hand, or latching onto it and hanging there like a furry sock on a clothesline.

*Sigh* Well, luckily, there is a way to whip these ill-mannered kitties into shape. One simple change to the pet file, and your cat will be doing tricks for those treats in no time. Even cats like Figpin can be made into tricksters.

Psshhh, yeah right. I'd like to see you try lady.

Ignore him. Okay, so here's what you'll need to make your cat a trickster:
-A cat who isn't a trickster already.
-A hex editor like Hex Workshop or Hexplorer. It needs to be a real hex editor. Programs like Petz Workshop and LNZ pro won't work for this.
-A backup of any .pet files you will be working with.

I use Hexplorer myself, it's a small, simple hex editing program that's easy to use. Best of all, it's free. Here are a couple links where you can download it. You can do a google search and find lots more.
Link 1
Link 2

Before we do anything, back up your files! I can't stress this enough. What we will be doing is pretty simple, but the smallest mistake can result in a corrupted pet file. Make a copy of the cat/s you will be making into tricksters, and put it somewhere safe. Also, make sure your Petz program is closed.

If you're using Hexplorer: The original settings on Hexplorer can be a bit difficult to see and use in my opinion. There is a way to change this though. Click on "View" in the menu bar at the top, then click on "Options' when the drop-down menu appears. There are a few font and color scheme options to choose from. These are the settings I use: 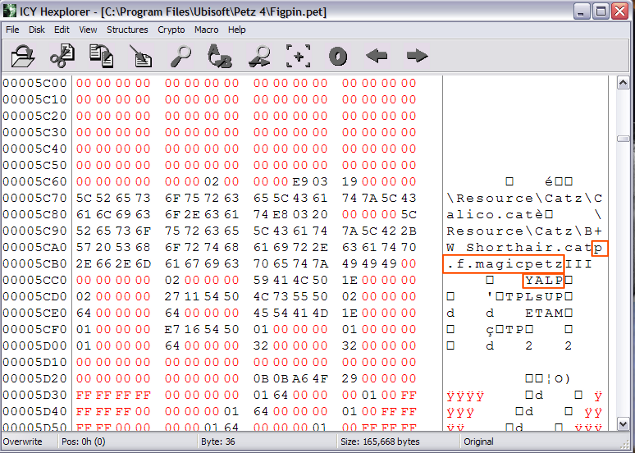 Now, you've got your files backed up, and you've got an appropriate hexing program right? We're all ready to get down to the nitty gritty. Hexing a cat to be a trickster is very similar to hexing a dog to be a trotter. I should note that I've tested this on Alley cats, B&W shorthairs, Calicoes, Chinchilla Persians, Maine Coons, Orange shorthairs, Persians, Russian Blue, Siamese, Tabby, and even Bunnies. I haven't tested the P5 cat breeds yet, but I assume this works on them just the same.

Step 1: Open up your cat's pet file in a hexing program.

Step 2: Start scrolling down. Go down past the LNZ section, which is the part of the file you edit when hexing/hex painting. In the smaller column on the right hand side, you'll see a bunch of numbers and stuff like [Project Ballz] [Addballz] [Ballz Info] [Paintballz] etc. We aren't making any changes to the LNZ part of the file, so continue past it. Beneath the LNZ section is a blank area, with a bunch of zeros in the larger column on the left. Keep going, and you'll come to something that looks like this: 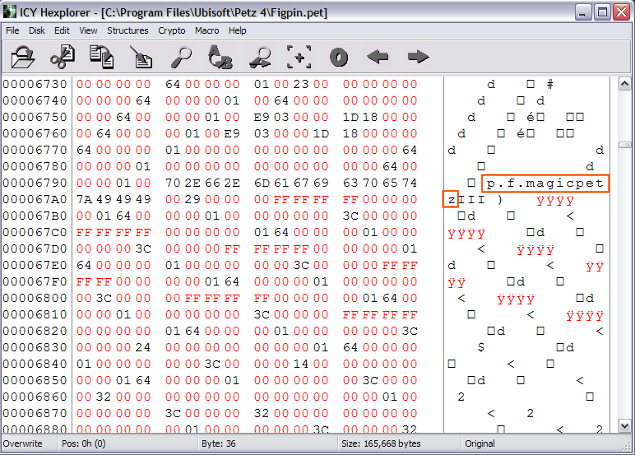 Notice the P.F. Magic and YALP in the orange boxes. YALP is "play" backwards. This area of the file is where all the info about your pet's personality traits, behaviors, mate compatibility, etc. is located. This is kind of your pet's "genetics" section. We aren't quite where we need to be yet though, so scroll down some more until you come to a second instance of P.F. Magic. It'll look something like this: 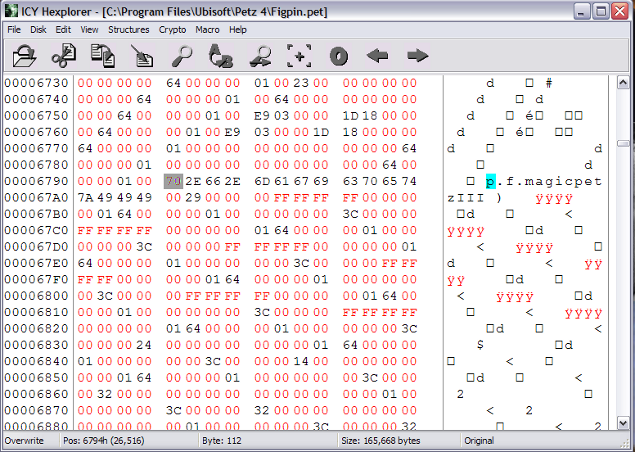 Step 3: This is where we want to be. Put your cursor on the P in P.F Magic. If you have the kind of cursor that highlights the whole letter/number like as shown in my screenshots, just click on the P to highlight it. If you have a different kind of cursor, like the one used for typing text in textpad or writing an e-mail, place your cursor right in front of that P. 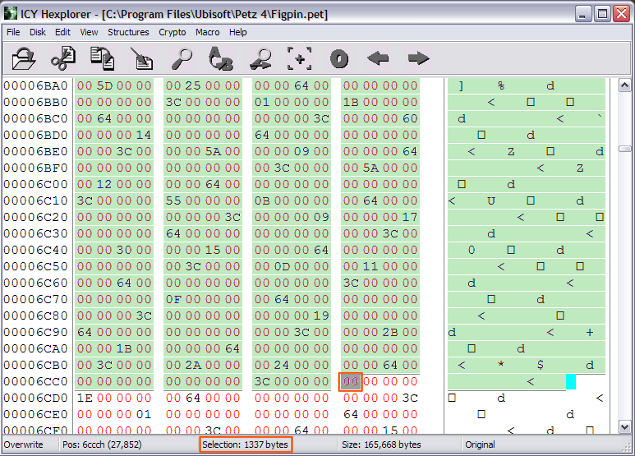 Now, we need to select exactly 1337 bytes. Your hex editing program should have a way of showing you how many bytes you're selecting. In Hexplorer, it's shown at the bottom of the screen where it says "Byte:" The easiest way to select bytes and scroll in Hexplorer is to hold down the shift button and use the direction keys. So, do that now. Starting from the P in that second P.F. Magic, carefully select exactly 1337 bytes. 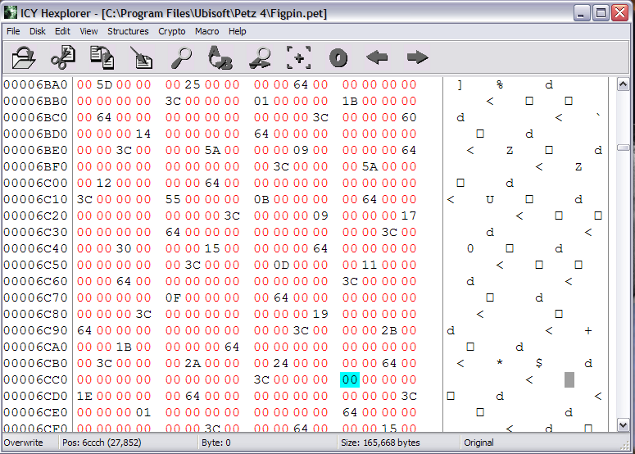 Step 4: So, you've now got 1337 bytes selected. That 1337th byte is the "trickster gene". That's the byte we are going to change to make our cat a trickster. In a non trickster cat, this byte is almost always 00. The magic number that makes a cat a trickster is 64. In my testing, I did run across some cats who had a different number there. There seems to be something particular about Maine Coons, as the ones I tested had neither 00 nor 64 there. Whether this is the case with all Maine Coons, I don't know yet. This made them slightly more complicated when it comes to hexing them to be tricksters, but it will still work if done correctly.

So, click on that 1337th byte to place your cursor there. 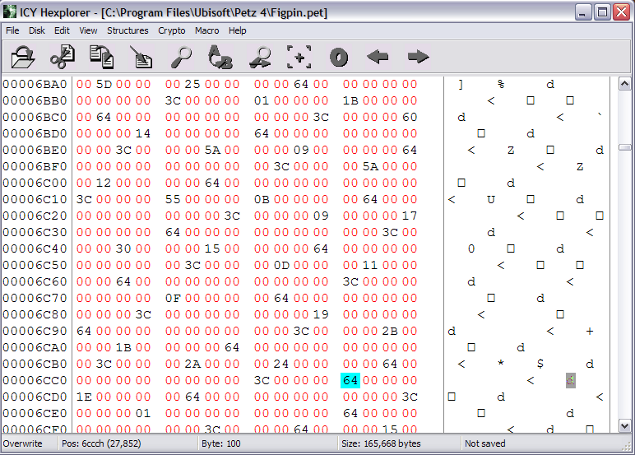 Step 5: Change that byte to 64. As I said, the original number is usually 00 in a cat who isn't a trickster, but if it's something else, be careful to remember what it was. 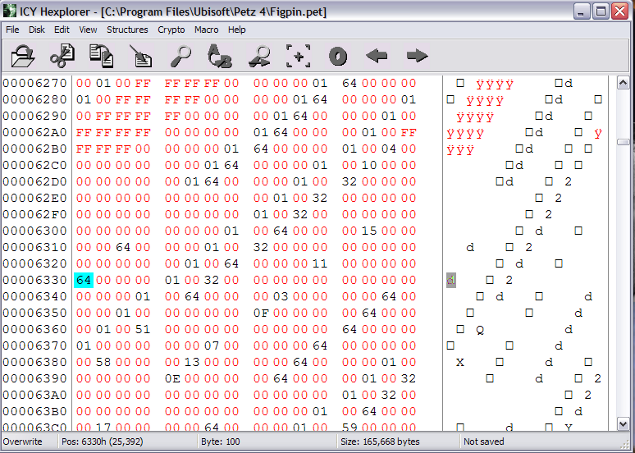 Step 6: We're almost done! Now, we need to make up for that little change we made to balance out the file. Don't skip this step!! If you do, you will corrupt your pet's file! In order to do this, we need to find another byte that is 64 already and make it 00. I've been doing this in the section between the two P.F. Magics. Scroll up a little until you're back at the P.F. Magic, and look in the larger column with all the numbers to the left. You'll see lots of 00s and other numbers. There's lots of 64s in here. Find one and click on it. 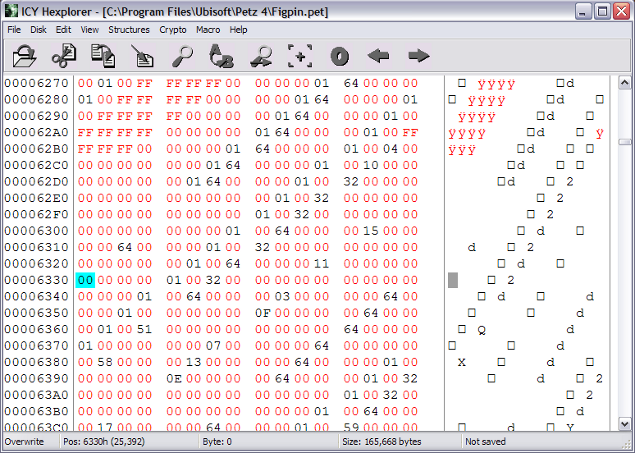 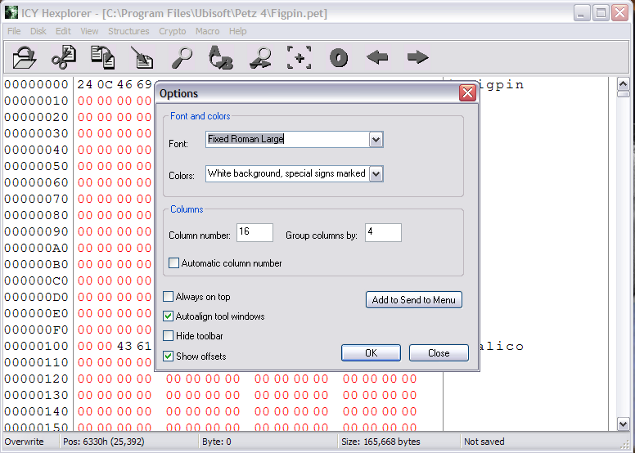 As far as I can tell, making the change in this particular area doesn't appear to have any appreciable effect. Is it the best place to do it? I don't know. There could very well be better places to balance out the numbers, so if someone knows something more, please let me know.

Step 7: Now that we've made the necessary changes, save your cat's file and start up Petz. If everything was done right, you'll have a trickster kitty! If you end up getting a corrupted pet message, don't be discouraged. Just make a copy of your backup (that I know you made, right?) and try again.

Alright Figpin, let's see you do your tricks!

Whoa! Hey, wait a minute lady! Back off! I told you before, I'm too sexy for tricks!

Come on Figpin, get your trick on!

So, there you have it. I hope this tutorial is easy to follow and helpful. If you have problems, questions, comments, or have information to add to this tutorial, you can contact me by e-mail.

TaTa for now my darlings!